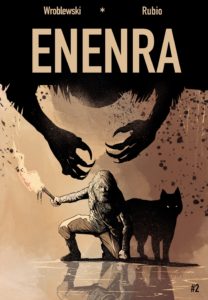 Issues 1-4 of Enenra by Aaron Wroblewski and Ezequiel Rubio are available now on Kickstarter.

February 27, 2021 – Enenra is a horror tale following Flight BA432 as it enters Heathrow airspace. Danger soon arrives as all attempts to make contact fail. Pressured by a highly influential third party, the airliner is allowed to land. Doctor Richard Marron and his team enter the aircraft. Discovering her terrifying secret, they try to understand and stop a deadly virus, before it’s too late.

Emel Saat from the Freefall Comics team, had a chance to speak with Aaron Wroblewski from the Enenra creative team.

Emel: Is Enenra the first comic that you’ve worked on?
Aaron: Yes, Enenra was my first comic, but definitely not my last.
Emel: How did you decide on the title of Enenra?
Aaron: It strangely fell into place. I can’t go into too much detail, or it will ruin what comes next – no spoilers, but I’d been mulling over different titles and during one of many internet searches, I found Enenra.
–  – When did you start working on Enenra?
It’s been a few years in the making. Enenra started out as a screenplay for a TV series. I was told it would make a killer comic, which is how you see it today.
Emel: How many issues will Enenra have?
Aaron: 16 in total. 4 issues per story arc. I should probably explain that the beginning of each issue shows a glimpse of the future, following a survivor in a post-apocalyptic world, while the main body is set in the present. By the 4th story arc (Issue 12), the main story would have caught up to events in that ‘future glimpse.
I also have a “special” issue planned, if I get the chance. Sort of a one-off, which would show what happens on Flight BA432 leading up to arriving in Heathrow airspace.
— — Do you already know how it will end?
Oh yes! I’ve written an outline for each story arc and issue.
Emel: Ezequiel Rubio did an awesome job with the art style and the color palette. Some of the panels stuck out to me. For instance, the dark figure that appeared in the airport. And the rows of dead passengers on the plane. Was this what you originally envisioned for the art style, or did it take a while to find the right one?
Aaron: It was all Ezequiel. The man has some wicked talent. We started out as grey-scaling the comic, but as each page was “completed” Ezequiel would go back and alter previous pages, tweaking them. Have to say he’s done a fantastic job. Cannot wait to see what he does with what comes next!
Emel: Is there anything you would like to say to your readers?
Aaron: I just hope everyone enjoys my novels! I have a Kickstarter running (http://kck.st/3olPEJQ), funding production and printing of issues 3&4, but you can get issues 1-4, including exclusives and free extras.
Where can we find you on social media?
Facebook:
https://www.facebook.com/enenragnovel
Twitter:
www.twitter.com/@aaron_wrob
Instagram
https://www.instagram.com/wroblewskiaaron/