Haunting is a spooky horror tale that raises our spirits 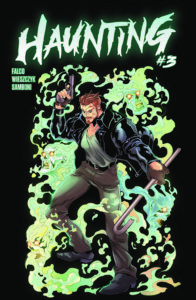 The supernatural horror tale by written and created by Phil Falco with art by Anna Wieszczyk, colors by Andres Samboni and letters by LetterSquids is available now on Kickstarter.

March 10, 2021 – Haunting follows teenager Bram, who has the extraordinary ability to raise the dead. As he is hounded by the mysterious necromancer Deacon, he teams up with a girl named Faith. . Check out the Kickstarter here: LINK

Emel Saat from the Freefall Comics team, had a chance to speak with Phil Falco about the process of making Haunting, as well as some of his. Check it out below:

1) It’s an interesting twist to see a character taking his time to leave a hotel while many people are violently killed around him and to have a religious character being tangled into this mess. What inspired you for the story and the characters?
Before ghosts and zombies ever became a part of the story, HAUNTING started as my reflection on the archetypal “hero” character.
In all media (but especially in comics), we often see heroic characters who act as sort of “sin eaters”. Despite all the good they do, they’re tormented by regret and guilt — haunted by the people they couldn’t save, the bystanders they’ve hurt, and the villains they’ve indirectly helped to create.
I think the reason we see this so often is because we expect our paragons to feel the weight of the world on their shoulders. We expect extraordinary people to be responsible and accountable.
With this in mind, I wanted to tell a story where the protagonist is undeniably the cause of pain and destruction and death. But instead of a hero who owns his mistakes, he’s a bratty teenage boy who refuses to take any responsibility for his actions.
Sure, Bram may make ghosts appear. And sure, those ghosts may kill a few people. But Bram doesn’t control them. He didn’t ask for them to appear. Therefore (in his mind at least), it’s not his fault. I’m very interested in exploring this character’s journey and the morality surrounding his ability.
Meanwhile Faith, the religious character you mentioned, is kind of the opposite of Bram. She very much believes in owning up to your mistakes. And she carries a lot of guilt from a betrayal in her youth (something that is hinted at in issue two and explored more fully in issues three and four).
At the end of the day, the characters of HAUNTING are different vehicles for exploring accountability and guilt. I’m really excited to continue to tell their stories and see how their relationships to these high-level concepts evolve in the coming issues.

2) How many issues will HAUNTING have? And do you already know how it will end?
I do know exactly how HAUNTING will end when the time comes. But in terms of when that will be, I’m trying not to nail myself down yet. Bram and Faith have a long journey ahead of them. As long as people are interested in reading, I would be happy to tell this story for dozens of issues before we hit that eventual end point.

3) Why do you like writing horror?
My favorite thing about  horror stories – and supernatural horror in particular – is that the human characters and relationships are often just as (if not more) interesting than the supernatural entities that anchor the story. The way that the characters interact with the fantastical, the fears and character flaws that are brought to light by their experiences, and the ways that their relationships are challenged – these are my favorite part of any given supernatural story. And this is what I’m most excited to explore in HAUNTING.

4) Walk us through how long it takes to make each issue of HAUNTING?
While there’s always variability, I would say that from the point I start writing a script to the point when I get the printed copies of an issue it’s usually about 8 months. One of the best things about comics is that they’re a collaborative process. So it may take me one or two months to finalize a script, but it then takes a bit longer (maybe three or four months) for our incredibly talented artist, Anna Wieszczyk, to complete the line art. Coloring adds another two months or so, and then lettering plus printing adds a final three or four weeks total.

The way we try to get ahead of the long production time is by having multiple comic issues in process at once. As I’m writing this, I’m gearing up for the launch of the HAUNTING #3 Kickstarter next week. But I’m also giving notes to Anna on the HAUNTING #4 art and finalizing the script for HAUNTING #5. As you can imagine, it gets a little confusing. But when you love what you’re making, it is totally worth the headache!

5) What is your favorite thing about making HAUNTING?
I would have to say the characters are the highlight for me. As a consumer, I’ve always been most attracted to the characters in whatever media I’m reading/watching. Plot, tone, genre, etc. are all super important, of course. But at the end of the day, I read/watch a story for the characters. So that has always been my approach to writing as well. How can I serve the characters and their arcs? What are the exciting things about each character and their unique voice? Whether it’s Bram’s snarkiness, Faith’s earnestness, or Deacon’s sadism, my favorite part of creating HAUNTING is bringing all of them to life.

6) I just have to say, I like that HAUNTING is a horror comic that is pretty colorful. How did you decide on the art style?
I’m glad you noticed! While I love a good dark horror comic I think that the brighter colors and more defined art style better suit the character-driven story I’m trying to tell. One of the things I looked most closely at when I was considering artists and colorists for the series was how expressive the art style allowed the characters to be. Despite the dark world of the series, I wanted the characters (including the ghosts) to ‘pop’ out at the reader. I’m really happy with where my team and I landed, as I think we’ve really hit that middle ground of maintaining a horror/supernatural aesthetic while also remaining colorful and expressive.

7) I’m sure your readers are dying to know why Deacon has some beef with Bram, and where in the world did Bram’s powers come from. Of course, the readers will need to read the whole series to find out more. Is there anything you’d like to say to your readers and supporters on Kickstarter?
Firstly, thanks to anyone who has taken the time to support HAUNTING! I wouldn’t be able to tell this story without all of you!
Secondly, I would say that I don’t plan to step on the brakes anytime soon! HAUNTING #3 should be live on Kickstarter by the time this interview goes up. In this issue, we’ll be flashing back to learn exactly why Deacon has dedicated his life to hunting down Bram. I promise plenty of exciting revelations in this issue. And we’re already charging forward with HAUNTING #4, the explosive conclusion to our first arc. So now’s the perfect time to jump on board and get caught up on the series!
You can find Phil across social media at these links:
Kickstarter: https://www.kickstarter.com/projects/philfalco/haunting-3
Instagram: @hauntingcomic
Facebook: @hauntingcomic