Lampblack is an adventurous tale with splashes of ink filled terror. 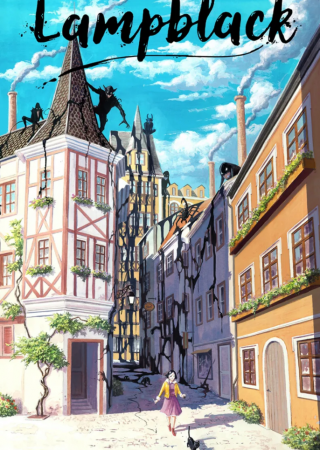 April 23, 2021 – LAMPBLACK #1 is a 24-page comic, the first in a limited series written by Camille Longley, with art by Pablo Peppino, colors by Damián Peñalba, and letters by Joel Saavedra. This tale follows a poor 18 year old girl named Mabel, who has special ink powers along with a deaf, runaway kid named Sterling. Their lives collide with each other as the terrible ink monsters emerge in their city.  Ultimately, Lampblack is a adventure centered around friendship, family, and war, set in a fantastical world depicted in stunning detail.

Emel: What did you want to be when you were a kid?

CAMILLE: I was always drawn to the arts. I started music when I was very young, but I was also an avid reader. I knew I either wanted to be a musician or an author. I actually started my undergrad as a Harp Performance major, but all while I was studying I had actually been writing a book during my most boring university classes. When I leaned into that more, it seemed such a natural fit. It’s really hard for me to not write or be thinking of new ideas for stories and characters. I think I would’ve eventually become a writer no matter what I did.

–  How did you get into comics?

When I started exploring Lampblack, I realized it needed to have a visual aspect. It’s about an artist! Not having art would’ve done the story a disservice. I had always wanted to try the comics format, so Lampblack seemed a great fit.

EMEL: What are your favorite Studio Ghibli films?

CAMILLE: My #1 favorite will always be Howl’s Moving Castle, but I’m also very inspired by Kiki’s Delivery Service, Spirited Away, and Castle in the Sky.

EMEL: Finding the right art style to fit with the story can be difficult, how did you decide on it?

CAMILLE: It’s absolutely so hard! And I am very picky about art. I knew I wanted something more realistic and something that would really inspire. Art is such a huge part of comics. But it’s not just the art. You will inevitably be working with the artist very closely to bring this project to life, and so finding someone who is fantastic to work with is really important.

I had sent enquiries to several artists after I wrote the first issue of Lampblack and had fully developed its storyline. I was really drawn to Pablo Peppino’s style, and he was from Argentina as well. I have lived in Argentina so it has a special place in my heart. When I asked Pablo about his availability and if he would be interested in the story, he immediately replied saying this was exactly the sort of thing he had been wanting to do and he was also very inspired by Ghibli’s work. It was a sort of star-aligning sort of thing. He was just finishing up a project and looking for more work and was really excited about the project.

I am very lucky because Pablo is great to work with, and he caught the vision of what the story is right away. One of the hardest things for me is the world-building aspect, but Pablo absolutely excels in this area and has really expanded Lampblack in ways that it never could have without him.

EMEL: Can you explain to us what the material “Lampblack” is and how you found out about it?

CAMILLE: I’ve dabbled in art as a hobby, and I used to buy this paint called Lamp Black. I always thought it was an odd name, and for that reason it’s always stayed in my mind. I was imagining a modern lampshade type of lamp, but it actually refers to oil-burning lamps where the flame would leave black soot on the glass. This soot can actually be used to make black ink, and that’s the reason for the name.

When I came up for the concept of paintings coming to life, all of these elements sort of coalesced. I’m an author of a fantasy series with fire magic (think fire bending, but darker and more twisted). I’ve always felt like fire has such a destructive and magical nature, and having an ink that can be made only from burning things seemed inherently magical to me. From the burning you get new life. Sort of a phoenix concept. Voila: Lampblack.

CAMILLE: For me, its definitely the comics format itself that’s hard. As an author, I’m accustomed to having as much space as I want. Cutting down a story segment into 24 pages, with only so many panels per page is difficult. It’s hard to know what to take out, because when I come to the page I have so many great ideas. But forcing myself to distill everything into a very condensed and very beautiful format improves the story, I think.

On top of that, because Pablo and I chose a very cinematic, landscape format, I try to give him as much room as possible and cut all but the most essential dialog and scene beats. We both love large panels with beautiful detail, and I’m not afraid of silent pages where the art speaks for itself. It was a difficult transition, but that’s why I wanted to move to this format, and I’m really happy with the result.

EMEL: It looks like ink people are known about, but are rare/disliked in this world. Can you tell us more about their background?

CAMILLE: As I mentioned, the ink is magic. When it’s spilled or ink bottles are left open and unattended, monsters called inkblots can emerge. These inkblots are obviously very terrifying, so people are very careful around ink. But obviously you need ink for newspapers, books, etc. So people are just very cautious. There are accidents, as we see in the first issue.

If you’re fighting a war, ink is obviously a horrible and very inexpensive weapon. But you also can’t control the inkblots, so there are always risks when using it. In this world, there have been entire nations destroyed be ink, so people are very afraid of it.

But as with any form of magic, it can be very delightful. Imagine being able to paint anything you want to life! It’s a hard balance, between danger and magic. I think magic should always have a cost.

EMEL: I’ve never seen a deaf character in a comic before! I’m very interested in seeing how Mable will be able to communicate with Sterling even though (assuming) she doesn’t know how to use sign language. Can you tell us some of your backstory about how you decided upon that aspect for Sterling?

CAMILLE: When I first wrote Sterling, he was hearing, but something about his character just didn’t feel right. I knew I was missing the larger picture for him. As I was thinking about the rest of the series, this image kept coming to mind of Sterling standing next to one of those massive cannons as he’s fighting in the front. There were bombs exploding everywhere and Sterling was just standing next to it, looking into the sky while his comrades were cowering and covering their ears. I kept getting this image over and over until I realized Oh! He’s Deaf! He doesn’t hear the bombs and they don’t scare him the same way they do everyone else.

I loved that image. I loved thinking that even in a war zone, he would have this sort of peace that he always carries with him, this calm that helps him stay cool in intense situations. It also made me really excited to write about all the miscommunications between Sterling and Mabel (because she doesn’t know sign language). Having lived in Argentina and had to learn Spanish, I know what that’s like, and it’s a really fun aspect to play with between characters.

EMEL: Sterling is very set in becoming a soldier. I know no parent would want their kid to enter a battlefield. Why is Sterling hard-set on this? Is he afraid of dying, especially with his lack of hearing?

CAMILLE: I think he’s just as afraid as anyone else, but some of those reasons he wants to go will be explained in issue two, so I don’t want to give too much away. He’s very stubborn, which is a trait he inherited from his father. And part of the reason he wants to go so badly is because his father doesn’t want him to.

EMEL: It seems Mable might be a loner, as she spends lots of time with her cat Poko. Is this because of her powers? Later on do we get to see what things are like for her in school?

CAMILLE: Mabel is definitely a loner, even though she’s very friendly. She comes from a family of immigrants and is an ink girl which sets her apart from her community. Her race is quite hated because of the powers, so she doesn’t have many friends. And she’s actually old enough to enter the workforce now, which we will get to see in future issues. There will always be a tension between her and everyone else, because they either see her as a danger or as a novelty. People just see the magic, not the girl behind it. And that’s a very hard way to live.

EMEL: When can we expect more from you in the future?

CAMILLE: Pablo and I are really grateful for the positive reception of Lampblack #1. After the campaign is over on Kickstarter, it will be available on Indiegogo. We are planning to launch issue #2 on Kickstarter in October with a special Halloween inspired issue which we are really really excited about.

In the meantime, I’m still writing novels, and I will have a Kickstarter preorder campaign for my book Talons and Teeth in May. This book is something new for me: a rewrite of history about a witch spy during WWI. There will be dragons battles and sharp-shooting witches, so I’m really excited about it. It should be a lot of fun.

EMEL: Where can we find you on social media?

CAMILLE:
I’m most active on instagram at @camillelongley
We also have an instagram page for lampblack at @lampblack.comic
so be sure to give us a shout-out!
Thanks! This was really fun!
Best, Camille