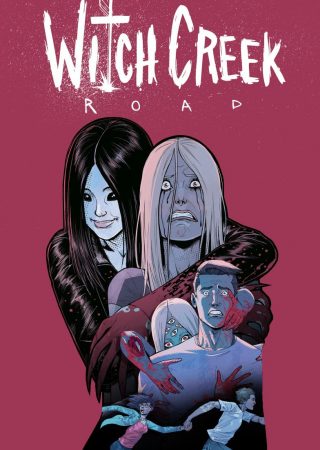 March 19, 2021 – Witch Creek Road is a survival horror tale that follows a group of high school seniors who, after taking a wrong turn, find themselves in the midst of an evil summoning gone-wrong. What began as a wrong turn, blossoms into a revenge tale with demonology at its heart.

John Freeman had a chance the opportunity to speak with Garth Matthams about his some of his influences and  the future with his comic Witch Creek Road. Witch Creek Road is available on Webtoons and is currently running a Kickstarter campaign for the Collected Trade Paperback edition. Kickstarter LINK:  HERE  | Webtoon Link: HERE

JOHN: Your art team, which consists of Kenan Halilovic, Colorsfactory, and Anna Jarmolowska, do a terrific job on Witch Creek Road. How did you form the art team?

GARTH: I believe I found them all in the Deviantart job forums. There are a few really good resources out there for non-artists such as myself, but Deviantart (which is essentially a community built for artists) is my favorite. Even if you don’t want to post in the job forums, you can still read them and see who’s looking for (or available to take on) new jobs. And, knock on wood, I’ve just been really lucky with the creators I’ve approached.

Garth: The obvious inspirations would be movies like Evil Dead 2 and Cabin in the Woods, which are both “cabin” movies. And they both have an element of humor to them, which I’ve tried to insert into Witch Creek Road as well. The short story The Hounds of Tindalos provided the inspiration for the Wolves (the three sexy demon antagonists). And I’m sure there are other inspirations as well, but those are definitely the main three.

JOHN: Were any characters inspired by real life people?

Garth: Oh, definitely. The “core” group of characters were the stereotypes – Edwin the Geek, Dirk the Asshole, Tyler the Jock, Abby the Bitchy Cheerleader, Sara the Girl Next Door, Betty the Comic Relief and Connie the Love Interest. But then I had some additional characters, and I didn’t really know what to do with them. I ended up asking some of my friends if they’d mind being characters and getting killed by demons. Everyone said yes, and so Grace, Ryan, Shaleeta, Ben and Angelo all joined the story. And it made my job easier, because I immediately had an idea of who these characters were, and could concentrate on writing the story rather than working on character creation.

And for those of you who have read the story, don’t worry! None of my friends have been killed by demons in real life.

JOHN: What have you learned over the course of crafting the three seasons of Witch Creek Road?

GARTH: Less characters! There’s a reason why most stories cap themselves at five protagonists…

JOHN: No spoilers, but Season 3 ends with some revelations and a big tease of what’s to come. What can you tell us about Season 4 and the road ahead for Witch Creek Road?

GARTH: Without giving too much away, readers will finally get to see an elder god or two. We’ll also get to see some reunions (*cough cough* a mother and her son *cough cough*), and a confrontation between the Wolves and Grace. Overall, I’ve been having fun writing it, and the art Kenan’s shown me has been amazing!

JOHN: Where can we find you in social media?

John Freeman is a comic book creator and writer based in Santa Maria, CA. He specializes in horror and thrillers. He started writing around the age of 15 and hasn’t stopped since. CROW CREEK is his debut one-shot comic.